You are here: Home / Browntail Moth 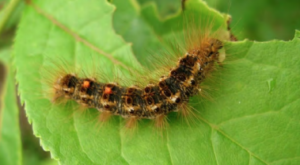 130 interested people joined us at the Georgetown School on March 21, 2019 to hear the latest about the browntail moth. 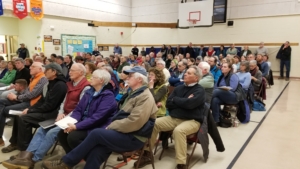 Thank you to Georgetown resident Sheila McCandless for organizing! 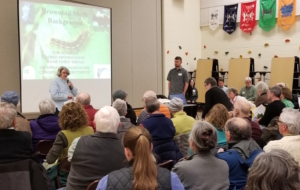 A general summary (FAQ) about the event and what we learned is here: Browntail FAQ from March session

Because the current and severe brown tail moth infestation is very localized in the Midcoast peninsulas, the Georgetown Conservation Commission has partnered with the Conservation Commissions of Arrowsic, Harpswell, Phippsburg and Westport to compare notes, discuss actions each town might take and encourage research on possible biocontrols through a project, partially funded last year by the Town of Harpswell, with the University of Maine.  We were fortunate to have Dr. Ellie Groden and Karla Boyd of the U. Maine project present to us on March 21.  Dr. Groden’s presentation is here:

May 2019 Browntail Moth FAQ sheet by Maine Dept of Agriculture, Conservation and Forestry:

These links also contain a wealth of great information:

Brown tail moths are not new.  This excerpt is from ‘A Nice Life Back Then’, Frances “Babe” Gunnell’s engaging memoir of growing up in Georgetown.

“The first brown-tailed moths that I can remember came around 1905.  They were on the trees:  cherry, birch, oaks, and maples, any leaf tree.  They were also on the bushes.  They would strip whole trees.  There would be nothing left.  They were bad because there seemed to be a fuzz in the air from the caterpillar.  My mother and my brother Leon both were very fair-skinned.  They would have these sore places, like a rash, but it never bothered me or my father.

The caterpillars made themselves a little tight nest by rolling the leaf.After the other leaves had gone you could see their nests around in the winter trees.Kids would pick them — pick a hundred and get five cents.Five cents was five cents in those days.Leon and I did a few hundred.Whoever was storekeeper down here, he used to buy them in.Ben Hinckley ran the store at that time.I suppose that he got paid from the state.

How did you reach them if they were up high in the trees?

Well, we had those long poles with clippers on the end.It just about killed me to try to hold the pole.

Do you think it had any effect on the moth population?

Oh, I suppose it had some effect.  They tried all sorts of things:  sprayed the trees, then they put sticky stuff around the trunk, different things.  The moths were starting to get kind of petered out by 1914-1915.  You know, some of these things that’s such a pest for a while, something seems to — I think something just took them away.” 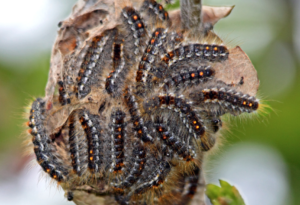 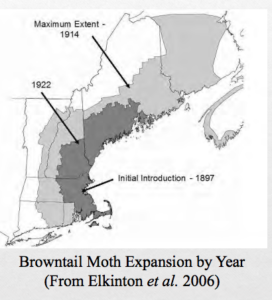 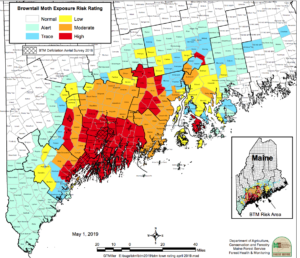