Each spring, with the help of the artistic talent commissioned from Georgetown Central School, the Conservation Commission posts “Turtle Crossing” signs at important turtle travel corridors around town.

Georgetown has a number of wetlands that are important for several species of turtle: snappers, painted and spotted (a threatened species).  Turtles mostly spend the winter at the bottom of bodies of water.  Beginning in May, turtles emerge to bask, forage, and, if they’re females of reproductive age (7 to 18 years old, for Maine species), travel to lay their eggs in more upland areas.  As a result, they often have to cross roads to get where they are going, or to get back to the pond or wetland, as do their offspring when they hatch.  If you see a turtle digging in sandy soil, it is most likely preparing to lay or covering up its eggs.

The turtle crossing signs serve to alert Georgetown residents and visitors to slow down and watch for turtles from May to October in these annual migration areas.  Roadkill is a significant factor in declining turtle populations.

Turtles are slow, but they don’t appreciate being helped along.  Turtles return to the same areas their whole lives, and will become disoriented in their direction if moved or rotated.  If you feel compelled to get a turtle out of the middle of a road, pick it up by the sides of its shell and move it smoothly in a straight line towards where it is headed just far enough to get it out of harm’s way.   A turtle which is relocated will search endlessly for its ancestral habitat and will not survive.

Click on the photo below for a video from the Canadian Wildlife Federation on how to move turtles out of the road.

How to (Safely) Move a Turtle across the Road

Here’s a joke from a turtle forum (but take it seriously…):

How To Age Snapping Turtles: Start with prodding the turtle with your little finger. If you find he can snap it off easily he is at least 3; ring finger about 5, middle finger 8, pointer finger 12, thumb over 20.

Turtle shells have protected them from natural predators for millennia, but are no match for cars.  Should you find a wounded turtle, Avian Haven in Freedom, Maine not only treats wounded wild birds, but also has a turtle facility.   You can reach them at (207)382-6761.  Five of Maine’s seven turtle species are listed as ‘of concern’ up to ‘endangered’ (snappers are not), so saving the life of a single turtle could be important to the continuation of the species, particularly given their long time to breeding maturity, small egg clutches, and life span.  (If you are in the road, be very careful of traffic.) 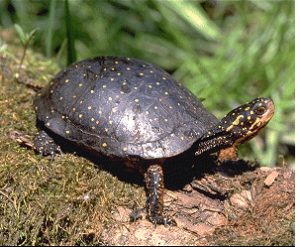 Spotted turtles mate under water from March to May.  They like all kinds of streams, bogs and wetlands but are particularly fond of brackish tidal areas, which makes Georgetown perfect for them.  Female turtles have more spots than males, and can store sperm for more than five years.  A good thing, since they take 7-10 years to reach reproductive maturity and then lay only 3-6 eggs per season.  Male turtles’ plastron (underside) is concave, to help with mating.  Females may travel quite far to what they deem a perfect nesting area.  Eggs take 11 weeks to hatch.  Whether an egg hatches as male or female depends on the temperature:  an egg that incubates at warmer temperatures will be female.  Spotted turtles are omnivorous, eating vegetation, insects, tadpoles, crustaceans and small fish.  They can live to 50.  Younger turtles have light colored undersides, which darken with age. 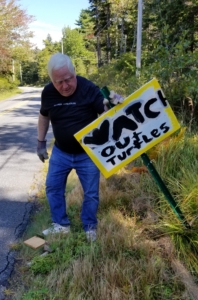